We prepared the full report and history for A-designer.co.il across the most popular social networks. A-designer has a poor activity level in Google+ with only 145 pluses. Such a result may indicate a lack of SMM tactics, so the domain might be missing some of its potential visitors from social networks. As for Twitter and Facebook activity - A-designer.co.il has 0 mentions and 0 likes. 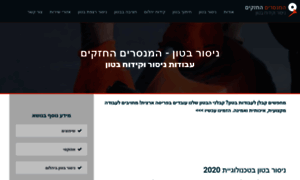